Why convert EDI to XML?

In this blog post, I will explain why our team decided to convert EDI to XML as well as the advantages and benefits of using this conversion from EDI to XML. On many occasions, EDI consultants, project managers and EDI developers and implementers brought up the following questions:

What are the benefits of having an EDI X12 file format converted to XML?

Why do we need to convert from EDI to XML and not to a database, csv or other file formats directly?

As you might already know, EDI2XML is a technology to convert X12 EDI to XML for incoming EDI documents. At the same time, the engine is intelligent and capable of converting an XML document to an EDI X12 format. This process of turning an X12 EDI file to XML happens because we have taken the time to build pre-defined xml schemas (xsd files) that respond to the business needs of 99.99% of EDI consumers.

EDI developers and integrators are able to use any loop, node or element they need to push to their database for incoming EDI documents. While for outgoing EDI documents in XML format, they are able to pick and choose the node, or EDI element they want to transmit out, fill it in, and send over to EDI2XML engine in order to create the EDI file in X12 format.

Convert EDI to Database or other formats

In the beginning stages of development, we established a list of objectives and a list of possible formats we can use. This was essential, as we needed to evaluate which file format would be best to use as a destination format for incoming EDI documents and outgoing EDI documents.

We wanted our EDI conversion technology to respond to the following criteria, as much as possible:

Below is the list of formats we had put together when we started the R&D, during our brainstorming sessions prior to developing the engine to convert EDI.

Why EDI to XML

There are many reasons why we selected the XML format as a destination to translate EDI, over other means. Following are some of these reasons:

Simplicity and self-descriptive: data encoded in XML is easy to read and understand by humans (i.e. EDI developers,) and it was becoming easier to process by computers

Having the ability to convert X12 EDI to XML gave us a competitive advantage over other developers involved in EDI projects. We have already implemented this converter in many businesses as well as helped IT consultants leverage EDI2XML in their EDI integration projects.

If you would like to know more about the plans offered for EDI2XML (Free Consultation), or would like to see it in action (live Demo), please do not hesitate to contact us. 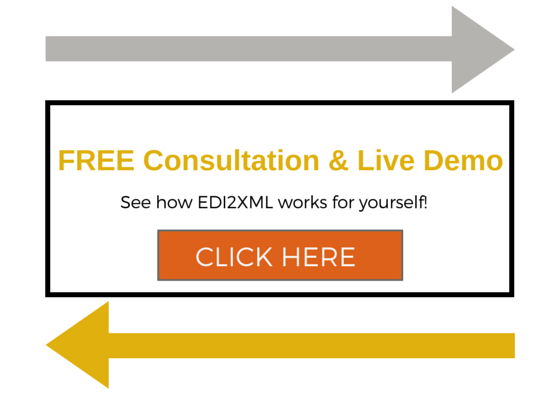